Understanding the Structure of HIV Protein May Lead to Novel Treatments 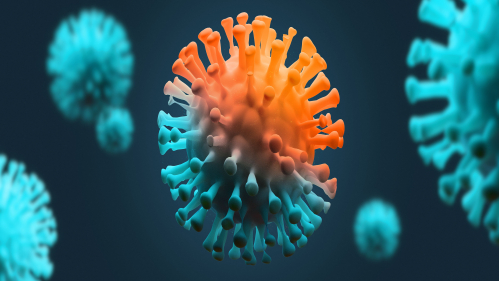 In a discovery that could spur the development of new therapies for more than 40 million HIV patients worldwide, scientists from Rutgers University and the Salk Institute determined the molecular structure of the HIV Pol polyprotein, a protein that plays a critical role in helping the virus propagate itself and spread throughout the body.

Their findings, published in Science Advances on July 6, may guide the creation of drugs that would bind to the protein and block its function.

“Drug molecules need a particular structure to bind specifically to their disease targets,” said co-senior author Eddy Arnold, a Board of Governors Professor and Distinguished Professor in the Center for Advanced Biotechnology and Medicine at Rutgers. “They fit together like complex puzzle pieces. Knowing the structure of the molecule you’re targeting helps you find or make a drug that will fit.”

Knowledge of HIV Pol’s structure sheds new light on how HIV reproduces itself. Previous research showed that the HIV Pol polyprotein breaks into three enzymes – a protease, reverse transcriptase and integrase – that work together to assemble the mature form of the virus.

However, it previously was unknown how the protease itself breaks free, first from the larger protein HIV Gag-Pol and then from HIV Pol. The new study suggests the protease initiates the process by self-cleaving or cutting itself free from the rest of the molecule.

“The first challenge was producing a stable version of the naturally transitory HIV Pol so the structure could be analyzed,” said co-first author Jerry Joe Harrison, who developed a breakthrough recipe for stable HIV Pol as a doctorate student at Rutgers and is a senior lecturer at the University of Ghana.

Once researchers were able to create a stable version of HIV Pol, the Salk team used cryogenic electron microscopy to reveal the three-dimensional structure of the HIV Pol protein molecule. This led to the discovery that Pol is a dimer, meaning it’s formed by two proteins bound together. The finding was a surprise to researchers because other similar viral proteins are single-protein assemblies.

“Structure informs function, and the insights we gained from visualizing the molecular architecture of Pol give us a new understanding of the mechanism by which HIV replicates,” said co-senior author Dmitry Lyumkis, an assistant professor in the Laboratory of Genetics and Hearst Foundation Development Chair at Salk.

“An unexpected realization was that the reverse transcriptase portion of this polyprotein precursor resembles its mature dimeric form,” said Arnold, who has studied the HIV reverse transcriptase for 35 years and has successfully contributed to developing some of the lifesaving HIV therapeutics that are widely used.  “The HIV Pol polyprotein was one of the most important missing pieces in the HIV structural puzzle,” said Arnold.

The authors said the discovery opens the door for important follow-up research, including studies of the HIV Pol structure of the larger and more complex polyprotein Gag-Pol, also involved in viral assembly, as well as taking a closer look at the role of integrase in assembling the mature form of the HIV virus during replication.

“Current HIV treatments include multiple classes of inhibitors for all three enzymes, and the discovery also reveals a new vulnerability that could be targeted with drugs,” said co-first author Dario Passos, a former researcher in Lyumkis’s lab at Salk.