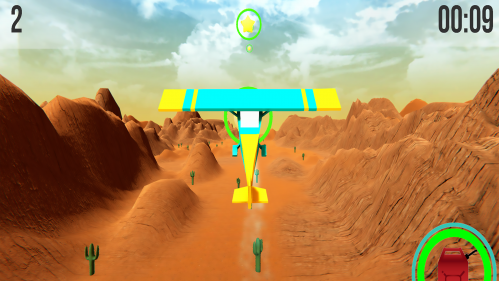 A small propeller plane operated by Allen DeNiear climbs into the sky. With a stark desert valley, seemingly inhabited by nothing more than cacti, visible on the red earth below, DeNiear makes a small motion with his hand. The plane pitches downward and dives.

DeNiear is not a pilot.

Nevertheless, his eyes focus on his targets, a series of orbs floating in the sky at various altitudes. His goal is simple enough: collect the orbs without crashing.

His reality, for the moment, is virtual.

Sitting in a lab at the Rutgers School of Health Professions in Newark, DeNiear moves his hand again. In his lap, a small infrared camera linked to the computer running the virtual reality (VR) flight simulator registers his hand movement. The plane ascends, and he collects another orb.

Both the motion and the game seem deceptively easy, but for DeNiear, who is recovering from a stroke and has limited mobility in his right hand, arm, and shoulder, the move is more than meets the eye, and the game, which can be played from anywhere you can fit a laptop, could wind up revolutionizing physical therapy treatments for stroke victims.

Today, DeNiear is with his Rutgers recovery team. But tomorrow, when he needs to do therapeutic work on his hand and arm, he’ll do it from home. No appointment is needed, the trek to a rehab center is eliminated, and—because the games are a lot more fun than monotonous rehab programs—he is more likely to actually do his exercises, thanks to the at-home approach to rehabilitation being tested and refined by Rutgers researchers.

Standard at-home physical therapy regimens for stroke recovery are both boring and frustrating for patients. “The adherence to home exercise programs is incredibly low,” said Gerry Fluet, an associate professor in the rehabilitation and movement sciences department. A physical therapist by trade, Fluet’s research is focused on using VR games to increase patient participation in at-home therapy programs.

“We’re trying to create something that’s more pleasurable and interesting than opening your hand 50 times while you watch it and wish it would move more,” he said.

We set out to develop simulations that people would stop in the middle of their day to play, and tomorrow, pick them up and play them again, and then again the day after that.

By building the physical rehabilitation regimen into a game, Fluet and his team are able to turn the monotony of stroke rehabilitation into something that is a lot more fun than it used to be. This is important, he said, because after a stroke, a person must put in a lot of work to regain control of the hand.

Without gaming therapy, people are exercising at home two or three times a week, for about five to 10 minutes, if they even bother doing it at all, Fluet said. Meanwhile, people in the lab’s study using the VR games at home are averaging anywhere from 60 to 90 minutes of exercise therapy in a week, with no additional reminders or encouragement. In the real world, this could translate into a much more cost effective and impactful form of stroke rehabilitation.

The game library developed so far has a dozen titles. In addition to piloting a plane, players can drive a car, run through a maze, hit the keys of a piano, and more—all from a Windows-based application developed by Fluet’s long-time collaborator Qinyin Qiu, an assistant professor in the Department of Rehabilitation and Movement Sciences at Rutgers, and Amanda Cronce, a digital designer in the Department of Biomedical Engineering at New Jersey Institute of Technology (NJIT), as part of a collaboration between Rutgers Biomedical and Health Sciences and the Motor Control and Rehabilitation Lab led by Sergei Adamovich at NJIT.

The study has patients play the VR games at home for at least 15 minutes a day, every day for three months. The gaming application collects the patient data and transfers it to a remote data server so Qiu and Fluet can monitor the at-home progress. They can even use the application real-time chat with the patient.

“We’re really trying to turn this into tele-rehab,” said Qiu, adding that the team is exploring go-to-market strategies and commercialization opportunities for their project through an I-Corps grant.

DeNiear is, self-admittedly, “not a video game person,” but he embraces gaming as a method for recovering from his stroke. “As you’re playing the game, it breaks the monotony of what you’re supposed to be doing. If I didn’t have the games, it would be a lot slower,” he said of his recovery. “It helped speed the process up, I think.”

Today, DeNiear has regained enough mobility to be able to drive again, and write with his right hand. He is still not 100 percent recovered, and he acknowledges that he may never be totally back to his old self. But he is committed to making the most of his situation by taking advantage of opportunities to participate in studies like Fluet and Qiu’s at-home VR physical therapy program.