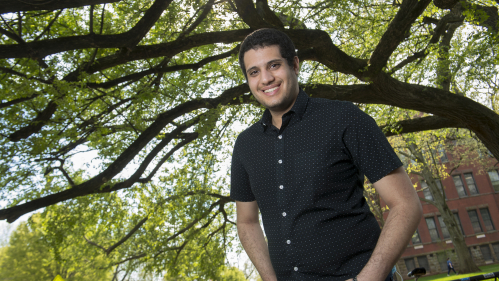 Frederric Kelada, who is graduating in May, helped launch the Aresty Rutgers Undergraduate Research Journal at Rutgers which uses a peer review program led by student facilitators.
Nick Romanenko/Rutgers University

Frederric Kelada spent his four years at Rutgers in constant motion: He was a teaching assistant for a physics class, a researcher in a neuroscience psychology lab and a volunteer for a crisis response team on campus.

Yet on top of all that, he managed to cofound the first undergraduate research journal at Rutgers to publish student papers from any academic discipline. The first two issues of the journal were released this year.

“It seemed to be a huge miss for Rutgers to be such a big research school and not to have an undergraduate research journal,” says Kelada, a cell biology and neuroscience major who hopes to attend medical school.

Kelada and his friend, Prachi Srivastava, a biology and psychology major, were both working in research labs the summer after their freshman year when they decided that Rutgers needed an interdisciplinary undergraduate research journal. Their first step was to contact the Aresty Research Center for help in providing the support to get the journal established.

“They really had to go through the ringer of what it is to start a journal from beginning to end as undergraduate students,” says Tamiah Brevard-Rodriguez, director of the center, which facilitates undergraduate student research. But she added, “In a departure from the fate of many previous attempts at establishing a research journal, the new journal is here to stay.”

While many universities have undergraduate research journals, what distinguishes the Aresty Rutgers Undergraduate Research Journal (RURJ) is that it uses a peer review program led by student facilitators, Brevard-Rodriguez says. Undergraduates who wanted to work on the journal met weekly during the fall semester with Aresty’s advanced undergraduate trainers, guest faculty members and professional staff to learn how to review research papers.

“Our review process is very extensive,” says Kelada, an honors student in the School of Arts and Sciences at Rutgers-New Brunswick. “There are a lot of steps involved.”

In the first round, four to six undergraduates reviewed each paper individually, and then in pairs and as a group, they discussed changes they would recommend to the author. Then at least one graduate student and one faculty member read the paper and suggested further edits for the author to incorporate. The final phase of review was sending each paper to a student copy editor.

The first issue of RURJ was published last December with six articles, ranging from the effects of antidepressant treatment on mice to the impact of campus food and physical activity at Rutgers’ Cook campus on students’ eating habits and exercise. The second edition of the journal will be released in May.

During the preparations for the journal’s launch, Kelada was seen as a leader who could motivate the students to reach their goal of getting the first issue published on time, Brevard-Rodriguez says.

“When emails were coming in and people were meeting in person, Fred was the driving force to make sure that things would get done,” Brevard-Rodgriguez says. “He was the one who really stayed on top of all the steps and made sure that no one lost sight of what the goals were. He was very persistent.”

Srivastava says the journal turned out to be a much bigger project than she originally envisioned. “When we first came up with the idea, I thought it would just be this website that we would run with a small group of students,” she says. “Now there are hundreds of people who know about it and we have a mailing list of close to 600 people.”

Kelada says the experience of creating the journal has taught him several lessons, including why it is beneficial to include a diverse group of students in the project. “A lot of what made RURJ great is we’ve had a lot of ideas come from a lot of different kinds of people, which was great because we needed as many ideas as possible to contribute to the founding of the journal.”

Having a team to help make decisions and learning to trust the members were also essential to teach Kelada to delegate tasks to students who had skills in other areas.

After graduating, Kelada, who lives in Basking Ridge, will continue working as a rehabilitation technician at a physical therapy practice before applying to medical school. He also hopes to remain involved in the journal in the coming year.

“I’ve been doing this so long and it’s been such a big part of my life,” he says. “Looking back at all we did, we’re so proud of ourselves and it’s so amazing because we never thought we would get here.”