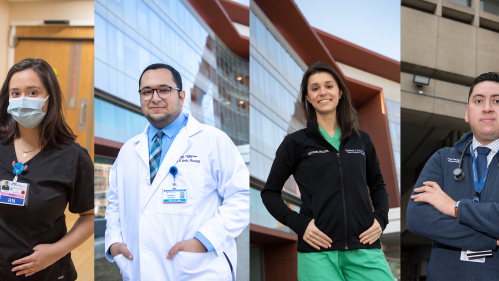 At the height of the pandemic last spring, as emergency rooms responded to a rapidly growing need, more than 1,000 Rutgers medical, nursing and pharmacy school students joined the front lines to battle COVID-19 and of those, more than half graduated early as part of New Jersey’s race to help.

Jorge Naranjo was among the physicians who graduated April 10, a month earlier than planned, from Rutgers New Jersey Medical School (NJMS). Rutgers moved up their graduation to provide hospitals and residencies with much-needed staff power. He is now a resident at Rutgers Biomedical and Health Sciences (RBHS), training at University Hospital (UH) in Newark.

“Everything began very fast and I found myself making the decision about early graduation in a matter of days. Match Day, when med students learn where they’ll do their residency, was scheduled for March 20, but everything closed and we went into lockdown a few days earlier. Not long after, I received a phone call from Dr. Maria L. Soto-Greene (executive vice dean of NJMS) who informed me about the situation at University Hospital. She asked whether I would be willing to start my residency early to help the community and UH.

“I knew I was going into the front lines of the pandemic but didn’t know how much would change over the next year. I just knew that we were there to help others and trying to do the best for the patients and team members who needed us. Everybody needed extra hands. I served on a team created to focus on patients with COVID. I’d begin my day by seeing all my patients before 7 a.m. and learning about any overnight events. I would see newly admitted patients who were COVID-positive with my senior resident and work on a plan before formal rounds with the attending physician.

“Things could turn for the worse in a day. That was the hardest part of this experience. Situations where a patient seemed medically stable in the morning but could be doing much worse at the end of the day. You learned to take it one day at a time, one step at a time. Residents were reassigned from other specialties to help with the patient surge we were experiencing. Resources were available, but there were so many COVID cases and all in very critical condition.

“While this was happening, my home city of Guayaquil, Ecuador, was hit super hard. The health system collapsed. Bodies were being laid in the streets. It was surreal. I know many other countries were having problems, but relatives and friends were sending text messages, videos and voice notes that were heartbreaking.

“I think we are doing considerably better now. Hospital operations are closer to normal. We have research to do on so many unknowns, especially with the virus variants: Are their outcomes the same or worse? The vaccine is one more weapon, but so much more needs to be done.” 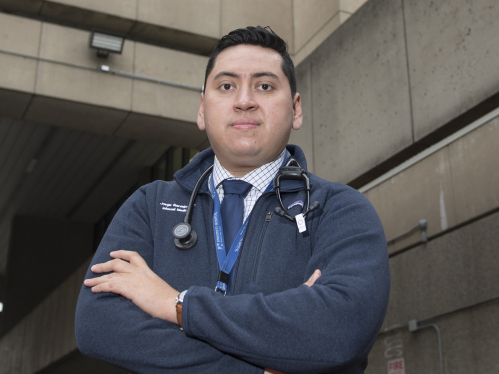 “Graduating into the pandemic brought a mix of emotions. I was excited to start training in medicine and making a difference, but also nervous. I had concerns about my patients’, parents’ and co-residents’ safety. Those concerns were quickly overcome by the resources the hospitals had ready to protect us.

“A large part of my job is treating critical patients, not all of whom have COVID, especially as University Hospital and Robert Wood Johnson are level 1 trauma centers. These patients require the same urgent management regardless of COVID status. In that way, my training hasn’t changed. I’m not thinking, ‘When will the COVID test come back?’ but ‘How fast can I get the patient to the OR?’ or ‘How fast can I get an EVD (external ventricular drain) in to relieve excessive fluid in the brain?’

“There are certainly challenges with treating COVID-positive neurosurgical patients. They need to be seen hourly especially if they have a neurological issue managed in the NeuroICU. But to be able to see patients improve despite having COVID and its associating risks has been very rewarding.

“For all that we’ve been through, I tell my family and friends that I know this is the right field for me. The work can be exhausting, and hours are long, but it is so much more manageable when you’re doing the job that you love, and when making a difference makes you feel so rewarded.” 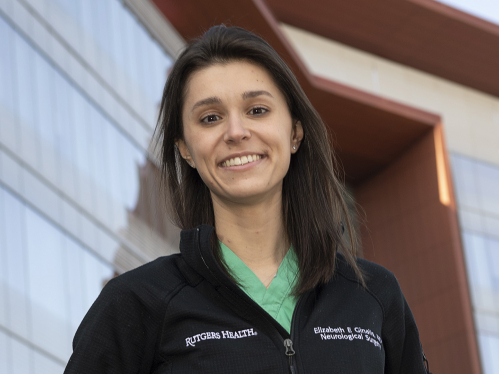 I knew I was going into the front lines of the pandemic but didn’t know how much would change over the next year. I just knew that we were there to help others and trying to do the best for the patients and team members who needed us.

Ashley Lopez graduated from Rutgers School of Nursing in May, and now works at Saint Peter’s University Hospital in New Brunswick, in the neonatal intensive care unit. She was one of the nurses who received emergency licenses before taking their board exams, through a state initiative to prevent pandemic-fueled licensing backlogs.

“For the most part, I care for newborn patients who don’t have COVID, but the pressures caused by the pandemic – from the increased number of patients needing urgent care to the steps we must take to mitigate the risk of infection – impact every aspect of the hospital. Our NICU is a large unit with an open floor plan, with 50 to 60 newborn patients and parents who need to visit them. We had to consider ways to manage visiting policies, how to accommodate family-oriented care, while protecting patients and nurses.

“Fortunately, we had resources in place, including procedures for FaceTime rounding, in which we call the parents to give an update on how their baby is doing, and cameras that allow parents to see their babies even with reduced visiting policies. The transparency and communication received a great response from parents even though these situations are very difficult for them.

“We have had situations where parents felt they had been exposed, and decided not to come visit their child in order to protect everyone else. In those cases, we do a lot of leaning on the resources we have. We’re FaceTiming and asking about that parent’s wellness, making sure the moms and dads are OK on their end: ‘You’re going to be taking care of your child soon.’

“Our purpose is to help other people. That’s why I went into nursing. I don’t feel very anxious because I know I’m being safe and protecting my family the best way I can. But we need to keep educating and encouraging people to wear their masks, be six feet apart. Just because you don’t see the pandemic doesn’t mean it’s not real or doesn’t affect people’s lives.” 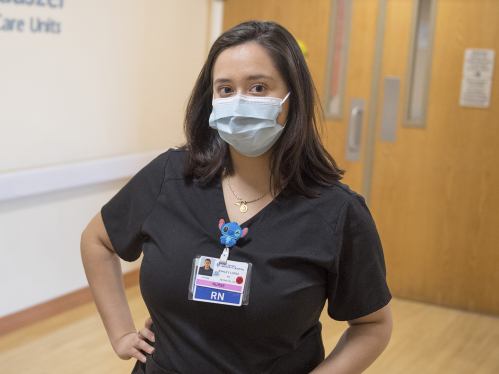 Timothy Amin graduated in May from Rutgers Ernest Mario School of Pharmacy, one of the group of students who graduated early and received emergency pharmacist licenses, before taking their board exams, from the state of New Jersey. He is now a pharmacy resident at Saint Barnabas Medical Center in Livingston.

“Our hospital is one of the largest transplant centers in the nation, but people were not coming in to get elective transplants. Instead, our clinical specialists and other resources were redeployed to the ICU and other units to help with the significant volume of patients with COVID.

“The historic nature of this disease creates an incredibly daunting task: New data about COVID and treatments is coming out every day. You have to stay on your toes and be cognizant of all of these new findings. You have to accept that we don’t know what the best therapy is for these patients. It can be very frustrating and demoralizing to see patients acutely worsen, but on the other hand it’s very rewarding when after all of these months we see tested approaches begin to turn patients around.

“We deal with the stress by relying on our teammates. By putting each patient at the forefront and removing all of the biases affiliated with COVID and its implications, while using the best evidence-based approaches, teamwork and interdisciplinary collaboration with nurses, physicians and other practitioners for the betterment of the patient.” 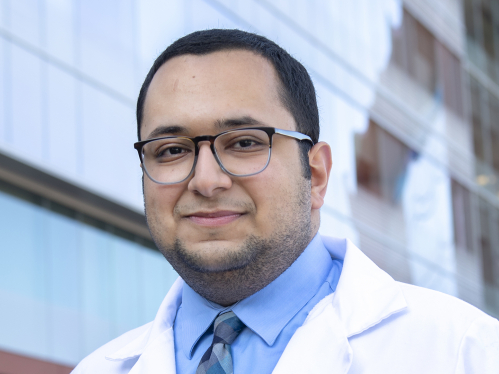