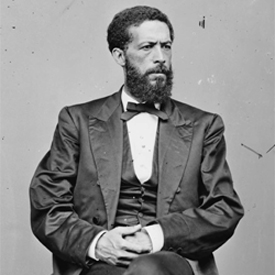 An 1894 clipping from a white Memphis newspaper finds The Honorable John Mercer Langston, one of the first black members of the United States Congress, denouncing Ida B. Wells, a black anti-lynching activist.

Driven out of Memphis for her campaign against racial injustices, Wells was in England at the time, rallying support for the anti-lynching cause. Langston, who served the state of Virginia in the House of Representatives as a Republican for six months from 1890 to 1891, downplays the atrocities. He firmly states that he does not uphold Wells’ views concerning the conditions of blacks in the South.

“Langston’s assertions contrast sharply with the body of evidence in his possession,” says Luis-Alejandro Dinnella-Borrego, a Jacob K. Javits Fellow and doctoral candidate in Rutgers’ history department in the School of Arts and Sciences who studies the rhetoric of postbellum black politicians.  According to his research, if Langston needed confirmation of the everyday horrors facing Southern blacks, “he need look no further than the lynch list he carried on his own person, which documented the cases of 640 blacks who were murdered between July 1887 and December 1889.”

Dinnella-Borrego wondered: Why would Langston comment as though he was unaware of the lynchings, particularly since he clearly had documentation?

At first glance, the former Virginia congressman’s comments seem to pander to the white establishment. But further research revealed that Langston believed Wells’ tactics exacerbated the racial hatred of white southerners and prevented advances of blacks toward political and social equality.  “He carefully shaped his rhetoric to emphasize positive changes in the lives of black Americans in the South,” says Dinnella-Borrego, describing a delicate balancing act the young historian calls “progressive pragmatism.”

Dinnella-Borrego began his exploration of the contours of black political participation in the postbellum South as a Dartmouth College undergraduate while taking a history course on the Civil War. Raised in Bergen County, New Jersey, by Cuban and Italian American parents, he became intrigued by and decided to write his honors thesis on Jonathan Clarkson Gibbs, who was the third African-American to graduate from Dartmouth and Florida's first black secretary of state from 1868 to 1872.

While pursuing his master’s degree in history at the University of Virginia, Dinnella-Borrego would continue his research of postbellum black politicians. He began to shift his focus from a merely biographical perspective to one that scrutinized how this cohort of elected officials articulated the will of their newly freed constituents, a path that led him to news accounts of Langston’s “progressive pragmatist” rhetoric. 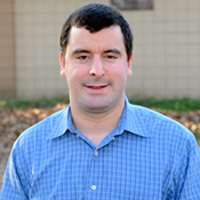 “Langston was ‘progressive’ because he worked to immediately provide blacks with education, and ‘pragmatic’ in that he also defended the rights of poor whites, thereby appeasing white Southern prejudice,” Dinnella-Borrego says.

Born enslaved, Langston, his mother, and siblings were later freed by his white father, a Virginia planter. He became a major figure in the abolitionist movement and Ohio’s fledgling Republican Party and recruited black soldiers for the Union Army during the Civil War. Langston also served as general inspector of schools for the Freedmen’s Bureau and was the first dean of Howard University’s law school. He would use his inheritance from his father, with whom he maintained a favorable rapport, to secure his seat in the 51st Congress.

During his brief term, Langston, whose great nephew was renowned Harlem Renaissance poet Langston Hughes, proposed a 16th amendment to the U.S. Constitution that would require a national literacy test to be implemented equally for all voters. “He believed that Americans, both black and white, needed to be educated before they could understand and seize the power of the ballot box,” says Dinnella-Borrego.

Dinnella-Borrego is writing his dissertation on six African-American members of Congress from 1865 to 1901, including Langston, with the guidance of Rutgers historians Ann Fabian and Mia Bay. His research explores the possibilities, constraints, and inconsistencies of their rhetoric and policies.

“Of course, there has been a lot of work done on Reconstruction,” says Dinnella-Borrego, who has taught American and African-American history courses at St. Thomas Aquinas College and Dominican College. “But not much has been done on placing these politicians into the larger scholarship on the post-Civil War South.”