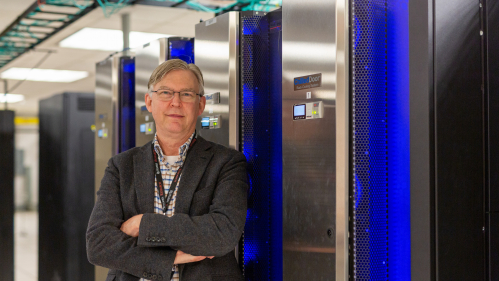 When 2020 began, the world’s fastest computing device was the Summit supercomputer, which performs 200 quadrillion floating-point operations per second (200 petaFLOPS). A few months later, a combination of private individuals and organizations like Rutgers had collectively donated more than five times as much computing processing power to a medical research group called Folding@Home, the group reports.

“Supercomputers, such as Amarel here at Rutgers, are crucial in advancing the frontiers of research and instrumental in many of the COVID-19 research breakthroughs,” said Barr von Oehsen, associate vice president of Rutgers’ Office of Advanced Research Computing (OARC).

“By connecting hundreds of these computers together across the world, we can achieve results in COVID research that would not be possible by any single system. We are much further along in understanding this virus and its variants because of the Folding@Home project and glad to be doing our part.”

Folding@Home isn’t the first research consortium to cobble together donated computing power — typically by connecting computers around the world and using them when their owners are not — but the size of the computational problem led Folding@Home to go big.

“Simulating every protein that is relevant to SARS-CoV-2 for biologically relevant timescales would require computer resources on an unprecedented scale,” a team of researchers wrote in the journal bioRxiv.

“To overcome this challenge, more than a million citizen scientists from around the world have donated their computer resources to simulate SARS-CoV-2 proteins. This massive collaboration was enabled by the Folding@Home distributed computing platform, which has crossed the exascale computing barrier and is now the world’s largest supercomputer.”

Rutgers, which has donated processor time from student computer labs, an OARC supercomputer, and other departments, has so far contributed more computing power than all but 99 of Folding@Home’s hundreds of thousands of ranked donors.

“One of the university’s primary missions is public service, and it’s hard to think of something that serves the public better than donating computing power to find treatments for COVID-19,” said Office of Information Technology (OIT) Associate Vice President and Deputy CIO Frank Reda.

Computing power contributed by Rutgers to Folding@Home has helped to map the range of shapes that both COVID-19 and potential treatments can assume.

Such work, which aims to find compounds that will bind to the virus and disrupt its function (without doing the same to healthy cells), has occupied over 280,000 GPUs and 4.8 million CPU cores that have been donated to Folding@Home’s efforts.

Internally, the team from Folding@Home joked that they might have generated more simulation data than had been produced in the history of science, but back-of-the-envelope calculations suggested the “joke” might well be true.

All that work generated countless discoveries, but the group’s main efforts have focused on a handful of areas: