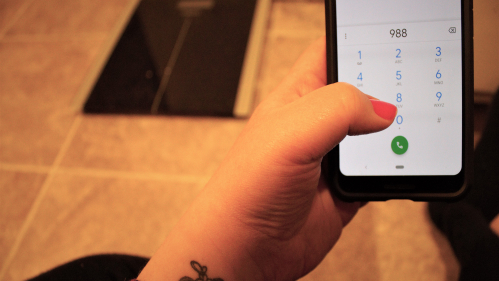 Large majority also believe someone having a behavioral health crisis should be treated first by a health-care provider or crisis counselor, not law enforcement

More than 90 percent of New Jersey residents support establishing an emergency three digit telephone number similar to 911 for suicide prevention and to provide immediate help to those experiencing a mental health crisis, according to a  poll conducted by the Eagleton Center for Public Interest Polling at Rutgers.

Taken on behalf of Project ASPEN, a collaboration between researchers from Rutgers and the National Alliance on Mental Illness of New Jersey, the poll found that 92 percent of New Jerseyans support the creation of a 988 hotline.

Starting July 16, the National Suicide Hotline Designation Act of 2020 requires telecommunications companies to rout 988 calls to the National Suicide Prevention Lifeline (NSPL), a national network of more than 200 call centers throughout the U.S. The law expands the role of NSPL to include mental health crisis.

“The time to reimagine New Jersey’s response to mental health emergencies is now,” said Meredith Masin Blount, executive director of NAMI New Jersey. “A mental health crisis deserves a mental health response, and 988 gives us the opportunity to do that. With an overwhelming majority of New Jerseyans wanting this service, the time for the N.J. Legislature to act is now.”

Researchers said 988 is an opportunity to establish a crisis standard of care that provides a continuum of services — 24/7 local call centers, mobile crisis teams, and crisis stabilization programs — that end the “revolving door” of emergency-room visits, arrests, incarceration and homelessness. The poll finds New Jerseyans are broadly supportive of this approach.

“The latest numbers from the Rutgers-Eagleton Poll show that just under half of New Jerseyans report feeling dissatisfied with how the state is doing on mental health and addiction, while 36 percent are satisfied,” said Jessica Roman, a research associate at Eagleton. “Given this split, it’s unsurprising that majorities of residents support new initiatives like the 988 hotline — those who are dissatisfied are looking for better solutions, while those who are satisfied may see room for expansion of services and programs.”

Itzhak Yanovitzky, a professor of communication at Rutgers and a co-principal investigator of Project ASPEN, said the findings of the survey demonstrate broad public support for policies that would address mental health crisis.

“In light of recent findings regarding the rising numbers of Americans, particularly youth and young adults, who experience major depression and suicidal ideation since the beginning of the COVID-19 pandemic, and the contribution of this to the resurgence of opioid misuse and drug overdose in many communities nationwide, policies that support effective response to mental health emergencies are urgently needed to address this significant and complex public health challenge,” Yanovitzky said.

The Eagleton poll was conducted by telephone using live interviewers from Feb. 25 to March 4, with a scientifically selected random sample of 1,044 New Jersey adults and a sampling error of +/-3.0 percentage points. The questions were adapted from an October 2021 survey commissioned by NAMI and conducted by market research and consulting firm Ipsos. For more analysis, please see Project Aspen’s website.