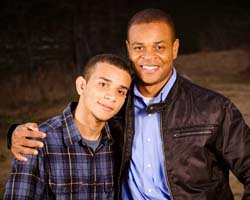 NEW BRUNSWICK, N.J. – Coming out to one’s family can be stressful, but gay black males face a unique set of personal, familial and social challenges.

The study, “African American Gay Youth and Their Families: Redefining Masculinity, Coping with Racism and Homophobia,” was published in the Journal of GLBT Family Studies and co-authored with Damien T. Frierson from Howard University. The research focused on gay black males, ages 19 to 25, and their families.

Gay black males struggle to cope with intersecting oppressions – racism, homophobia and sexism, says LaSala. They carry a “special stigma” that some straight black males may find particularly disturbing. “The world already sees you as less than others. By being gay, you’re further hurting the image of African-American men,” LaSala says was a common reaction among the male relatives of the black youth when they learned that their relative was gay.

“On a clinical level, targeted interventions, especially those that include the young man’s biological father or a father figure, can assist families to cope with what for many is an unexpected and troubling reality,” says LaSala, who works with gay youths and their families in private practice and outlines interventions for families in transition.

Child-rearing for the parents of a black son can be especially daunting, given the increased risk for poverty, HIV/AIDS and other illnesses and imprisonment faced by African- American men. Black parents often feel guilty when they learn their child is gay and many African-American gay youths before coming out distance themselves from their parents. In his study, LaSala observed that many parents found that having a confidante with whom they could share emotions, helped them realize that their sons’ sexual orientation was not caused by faulty parenting, and they risked losing their child if they could not accept his being gay.

Black parents may be less likely than whites to “mourn the loss of a normal life” for their gay sons, perhaps understanding that a normal life was less of a sure thing, according to LaSala, author of Coming Out, Coming Home: Helping Families Adjust to a Gay or Lesbian Child (Columbia University Press, 2010).

Gender role concerns are a repetitive theme for young African-American men and their families. One young man in the study described the African-American community as very strict when it comes to homosexuality. “It’s a masculinity thing,” he said.

LaSala points to existing research that calls upon black men to be hypermasculine, a trait characterized by the absence of overt emotions and the appearance of vulnerability, as well as a readiness to have sex at any time. When gay blacks realize they don’t fit the stereotype, they often develop a sense of alienation, loneliness and anxiety, not knowing where they fit in.

LaSala recalls the words of a black single mother in the study who worried about gender expectations in her community: “You are told to be a man … and being a man does not mean you sleep with other men,” she said. “Being a man means you have a woman and you procreate and continue the family name.”

LaSala calls for more research to identify the needs of this understudied population. Education is key to resolving the clash between homosexuality and male gender role expectations in the black community. Social workers, therapists and community leaders need to better understand the multiple pressures on gay black youth to help families build stronger bonds.

The involvement of a young gay man’s biological father or a father figure can be crucial to relationship building. Too many family therapists and social workers accept the mother’s explanation that their son’s father “isn’t in the picture,” which is too easy a way out, according to LaSala. “Family discussions can lead to expanded and more flexible views of masculinity, so clinicians must engage the youth’s father if at all possible,” he says. “A father is an essential part of the child’s history and can add a lot to the discussion.”