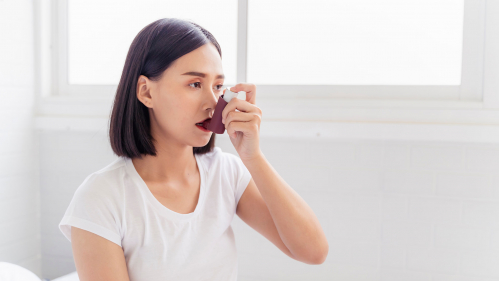 A global study of asthma patients by Rutgers and an international team of researchers found a combination of two drugs dramatically reduces the chances of suffering an asthma attack.

Results from the clinical trial called MANDALA, published in The New England Journal of Medicine, show that a combination of albuterol, which provides relief from an asthma attack by relaxing the smooth muscles and is used for immediate asthma relief, and the corticosteroid budesonide, taken via an inhaler, lower the number of sudden episodes of shortness of breath, wheezing and coughing in patients. Such incidents, referred to medically as “exacerbations” but commonly known as asthma attacks, can often lead to an emergency room visit, hospitalization, or, in some cases, death.

“This represents a paradigm shift in the treatment of asthma. We see this combination treatment, which is the first of its kind, as becoming part of standard therapy,” said author Reynold Panettieri Jr., a professor of medicine at Rutgers Robert Wood Johnson Medical School and vice chancellor of Clinical and Translational Science.

The Phase 3 clinical study, which included more than 3,000 asthma patients from 295 sites throughout the U.S., Europe, and South America, was designed to evaluate the safety and efficacy of a combination of albuterol and budesonide, both AstraZeneca PLC drugs, as a treatment for patients with modest to severe asthma. Albuterol is a short-acting beta 2-agonist that works by attaching to miniscule proteins called beta receptors in the airways, relaxing the muscles there. As a corticosteroid, budesonide decreases swelling and irritation in the airways.

Standard “maintenance” treatment involves taking an inhalant that combines two drugs, one a long-acting beta 2-agonist and the other a corticosteroid. When patients suffer an asthma attack, they typically use a rescue medicine such as albuterol. They also are often prescribed doses of oral steroids. Physicians are looking to prescribe oral steroids less frequently because of their powerful side effects.

The trial was divided into three groups. With many patients already on daily maintenance asthma therapy, participants in the groups were given one of three different rescue therapies to use, should individuals suffer asthma attacks, that included either a combination of albuterol and a high dose of budesonide or a lower dose of budesonide. A control group was given just albuterol.

The patients, the study concluded, not only improved their lung function; they suffered fewer attacks.

Scientists found that albuterol with the higher dose of budesonide reduced the risk of an asthma attack by 27 percent in the short term and reduced asthma attacks by 24 percent annually. This combination also reduced use of corticosteroids, which can have adverse side effects, by 33 percent.

“With this new inhaler that delivers more inhaled steroids every time patients take the rescue therapy, they’re getting more at a time when they’re having a flare-up and when they need it,” said Panettieri, who is also director of the Rutgers Institute for Translational Medicine and Science and conducts research at the Child Health Institute of New Jersey. “We showed that, beyond decreasing their exacerbations, it decreased their need for oral steroids after a flare-up.”

According to the Asthma and Allergy Foundation, about 25 million adults and children in the U.S. have asthma.