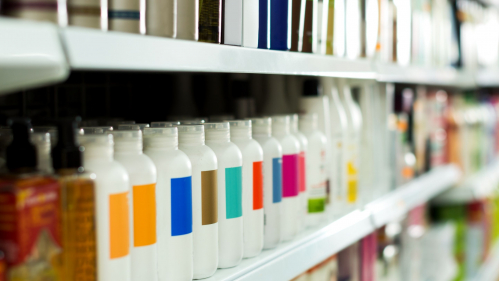 Use of certain personal care products during pregnancy may impact maternal hormone levels, according to a new Rutgers study.

Personal care and beauty products contain several ingredients that often include a wide range of endocrine-disrupting chemicals like phthalates, parabens, phenols and toxic metals. These chemicals interact with hormone systems, influencing synthesis, regulation, transport, metabolism and hormone reception, which are all especially vulnerable during pregnancy.

The National Institute of Environmental Health Sciences and National Institutes of Health-funded study, published in Environmental Research, examined the association between personal care product use and the levels of sex steroid hormones, including estrogens and progesterone and thyroid hormones among pregnant women. The researchers also explored how demographic factors impact the use of certain personal care products.

Researchers collected blood samples from 1,070 pregnant women between 18 and 40 years of age enrolled in the Puerto Rico PROTECT Cohort, an ongoing prospective birth study designed to examine environmental exposures in pregnant women and their children who live in the northern karst zone of Puerto Rico.

As part of the study, participants underwent physical exams and completed a series of questionnaires providing their demographics, occupation, lifestyle and use of personal care products like fragrances, lotions, cosmetics, nail polish, shaving cream, mouthwash, shampoo and other hair products, such as bleach, relaxers and mousse. Participants also provided blood samples twice throughout their pregnancies, which were analyzed for nine sex steroid and thyroid hormones.

The researchers found that the use of hair products, particularly hair dyes, bleach, relaxers and mousse are associated with lower levels of sex steroid hormones, which have a critical role maintaining pregnancy and fetal development. Disruptions of these hormones may contribute to adverse maternal and pregnancy outcomes like growth restriction, preterm birth and low birth weight.

“Alterations in hormone levels, especially during pregnancy, can have vast consequences beyond health at birth including changes in infant and child growth, pubertal trajectories and may influence development of hormone-sensitive cancers such as breast, uterine and ovarian cancer,” says the study’s lead author, Zorimar Rivera-Núñez, an assistant professor at the Rutgers School of Public Health. “Additional research should address the public health impact of exposure to chemicals in hair products in pregnant populations.”

“Prior research has shown that non-pregnant populations have also reported associations between frequency of use and socioeconomic markers, such as household income and education,” Rivera-Núñez said. “A strong culture of beauty influences Latina women, which may impact consistent use of cosmetics through pregnancy. This data is important because it will allow us to identify populations who are at an increased risk of chemical exposures associated with personal care product use.”

The researchers, who include individuals from the Rutgers Environmental and Occupational Health Sciences Institute, University of Michigan, University of Puerto Rico, University of Georgia and Northeastern University, recommend that primary physicians and obstetricians should speak to reproductive-age women about the potential health impact of endocrine disrupting chemicals, like those found in hair products.