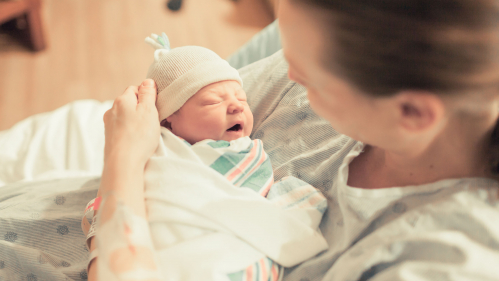 Antibiotics for cesarean section births are just as effective when they’re given after the umbilical cord is clamped as before clamping – the current practice – and could benefit newborns’ developing microbiomes, according to Rutgers co-authored research.

The study, by far the largest of its kind and published in the journal Antimicrobial Resistance & Infection Control, challenges current recommendations for antibiotic use. Administering antibiotics after clamping does not increase the risk of infection at the site of C-section incisions, the study concludes.

“Most national and international guidelines, including those of the World Health Organization, recommend that women receive antibiotics before the skin incision for cesarean section,” said co-author Maria Gloria Dominguez-Bello, Henry Rutgers Professor of Microbiome and Health, professor of microbiology and anthropology, and director of the New Jersey Institute for Food, Nutrition, and Health in the School of Environmental and Biological Sciences at Rutgers University–New Brunswick. “That exposes the baby to antibiotics during birth, affecting the microbiome assembly in the newborn. Early disturbance of bacterial colonization and the developing healthy microbiome may have consequences for immune development, leading to immune malfunctions later in life.”

A healthy microbiome helps guard against infection and antibiotics disrupt the microbiome, wiping out both bad and good bacteria, according to the U.S. Centers for Disease Control and Prevention. Even stressors perceived as small, such as a hospital birth, can affect the neonatal microbiome, as shown by Dominguez-Bello’s group in a 2018 study, and perturbations of the microbiome in early life possibly affect development of immunity and metabolism.

Administering antibiotics to prevent infections of the surgical site is common practice and justified to minimize risks. But for cesarean section, the impact of antibiotics on the newborn and its developing microbiome should be considered, as well as the risk of infection, Dominguez-Bello said. Giving mothers antibiotics after clamping avoids additional stressors that impair transmission and colonization of maternal microbes after birth, so the current recommendation for antibiotics before clamping should be revised.

The study, led by Rami Sommerstein at Bern University Hospital in Switzerland, covered 55,901 women at 75 hospitals in Switzerland from 2009 to 2018. They include 26,405 patients who received antibiotics before skin incisions for C-sections and 29,496 patients after their umbilical cords were clamped.

“That means receiving antibiotics after umbilical cords are clamped to protect against maternal infections is as effective as receiving them before incisions,” Dominguez-Bello said. “The guidance on the best timing for antibiotic use should be reevaluated to help promote the development of a healthy microbiome, which is essential for normal immune system development in babies. Bypassing the birth canal is already a stressor that should not be aggravated by the effect of antibiotics in the newborn.”