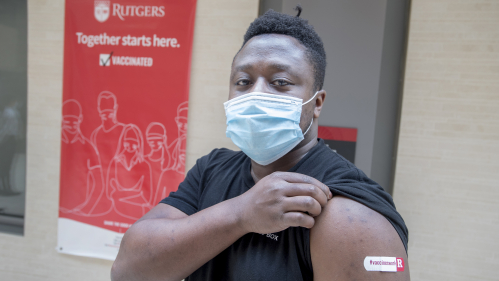 The large number of Garden State residents getting vaccinated is a drastic change from the widespread vaccine hesitancy last fall before Pfizer and Moderna’s initial news of successful vaccine trials.
Nick Romanenko/Rutgers University

Seventy-three percent of New Jerseyans say they have received at least one dose of a COVID-19 vaccine, and while another 10 percent say they will likely roll up their sleeve for it, 16 percent remain unwilling, according to the latest Rutgers-Eagleton Poll.

The large number of Garden State residents getting vaccinated is a drastic change from the widespread vaccine hesitancy last fall before Pfizer and Moderna’s initial news of successful vaccine trials.

Older residents, higher-income residents, and residents with higher levels of education are all more likely than their counterparts to say they have received at least one dose of a vaccine, as are exurban (81 percent), suburban (77 percent), and urban (75 percent) residents compared to those living in other regions of the state. Republicans (32 percent) and independents (34 percent) are twice as likely as Democrats (16 percent) to report not getting a dose yet.

Among people unwilling to get vaccinated, 67 percent cite a concern about side effects (down from 80 percent), 58 percent cite a distrust in the government and 57 percent cite the belief that the vaccines were developed and tested too quickly as “major reasons” for their resistance.

When asked what would make them more likely to get the vaccine, 49 percent of those currently unwillingly say nothing would change their mind; 8 percent mention the need for more information, and 7 percent say they simply need more time.

“The enduring nature of vaccine hesitancy for a small yet notable portion of the population in New Jersey resembles what we are seeing throughout the rest of the country,” said Ashley Koning, an assistant research professor and director of the Eagleton Center for Public Interest Polling (ECPIP) at Rutgers University–New Brunswick. “And while some of those unwilling may ultimately be convinced, others may not. Unfortunately, we know from current data that infection, hospitalization, and death rates are currently much higher for those who are unvaccinated compared to those who are immunized.”