A Top Chef—on TV or in Her Restaurants 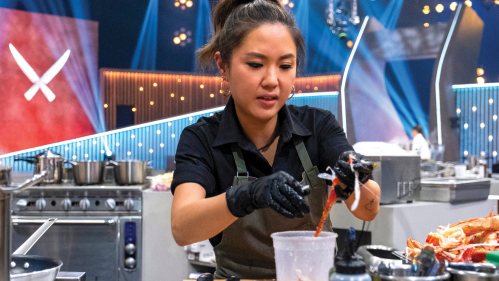 Alumna Esther Choi was able to withstand the heat in Kitchen Stadium, the set of the Netflix series Iron Chef: The Quest for an Iron Legend, where she was making a bid to become the world’s first Iron Legend. “Being able to represent Korean culture and making my grandmother proud—it’s really the ultimate.”
Photography by Patrick Wymore/Netflix

No matter the setting, alumna Esther Choi always gives her heart and soul.

Esther Choi stabs her poached gigantic king crab right between the eyes with her right hand and steadies it with her potholder-covered left hand, an unwieldy package with legs and claws that she quickly and deftly transfers from one pan to another on the stove. “It’s as big as my head, literally,” she says, nonplussed. The massive crustacean looks as big as she is, but Choi is undeterred, pumped up with the adrenaline that comes from starring in the season finale of a fast-paced, all-or-nothing cooking-competition series.

Choi LC’08 is feeling the heat in Kitchen Stadium, the set of the Netflix series Iron Chef: The Quest for an Iron Legend, where she is making her bid to become the world’s first Iron Legend. To clinch the title, all she has to do is beat five of the best chefs on the planet. The playing field is hardly level, though. Each Iron Chef has to make one dish; she and her team have to make five.

(Spoiler!) To qualify as the finalist, she already bested one Iron Chef. “To beat an Iron Chef was amazing,” she says. “Being able to represent Korean culture and making my grandmother proud—it’s really the ultimate.” Choi’s grandmother named her, helped raise her, and shared a world of Korean flavors and ingredients with her. When the show’s host asks Choi if she had ever imagined being in the Legends battle, she replies: “Definitely. I worked hard to get here, and I deserve the title.”

(Another spoiler!) In the end, she scored 82 points, but her five competitors scored 83.

Iron Legend is the most recent of several appearances she has made on food-related television shows. Others include Battle of the Brothers, Selena + Chef, Chopped, Chopped 420, and Beat Bobby Flay.

In addition to being a strong presence on television, Choi is also a successful restaurateur, known for ramen and kimchi-inspired cuisine. In 2014, she opened her first Mokbar (from the Korean word for “eat”) takeout spot in a food hall in New York City, and the following year opened a second Mokbar, in Brooklyn. Then last fall, she opened a third location, in midtown Manhattan. There are plans to open another location, in Newark.

The story of this Korean-inspired food empire began when Choi was 14, and it’s a love story. Throughout high school and college, she worked in restaurants to support herself. “My parents never had to pay a single penny for school,” she says. “I bartended and served and loved hanging out in the kitchen with chefs and cooks to watch what they were doing. That was my jam.”

Choi began at Rutgers majoring in pharmacy, then transferred to psychology, which led her to a position in sales and marketing for a software company that left her feeling unfulfilled. She said she felt like “an ant in an ant farm, like I had no impact. I just didn’t understand why I was there.” So she returned to school, this time to the Institute of Culinary Education in New York. And it was like coming home.

“When I left my tech job, I went to culinary school and went back to working at a restaurant because they’ve always been my safety blanket,” she says. “They are like my home and what I love more than anything. I spent way more hours working at restaurants than hanging out with friends.”

Choi says she’s always been driven that way because she loved feeling free and independent, calling her own shots because she made her own money. She never had to depend on anybody else. “Restaurants brought me that freedom, and that’s why I think I fell in love with them without knowing I was falling in love,” she says.

That romance is nurtured through her innate competitiveness and curated by her creative spark. Being intentional about your creativity, Choi says, is an exercise you must do continuously. If not, it just goes away. “I’m a middle child from an immigrant family.

I’m the year of the ox, a Scorpio, notorious for being hardworking and super stubborn,” she says. “I focus a lot of my energy on the creativity I bring to the table because being inspired and continuously having this passion is difficult. I live in New York and have three restaurants, and being creative distinguishes me as a skilled chef. In this business, you have to pay your dues because without basic techniques and skills, you can’t become a great chef. And it’s a struggle when you’re in it, day in and day out, cooking on the line. You’re just over it. I had to think, ‘How do I take this to a place where I’m going to be passionate about it?’”

Maintaining her work-life balance is also an intentional effort for Choi. As a chef and entrepreneur, it would be easy for her to work 24/7, which she did when she started her business. She ended up driving herself into the ground, working, worrying, and having anxiety attacks.

“Switching that mindset was tough for me,” she says. “I realized the most important thing is saying, ‘I’m going to take this time off and nobody can bother me.’ Turning my phone off and being intentional about how I balance my life has probably been the most important lesson for me. Even if I’m hanging out with my sous chefs who are my friends as well, and they try to talk to me about work, I’m like, ‘I’m off the clock, guys.’”

But on the clock, Choi pursues her personal passion of combining traditional and modern, American and Korean, blending cultures in surprising and delightful ways. “One of my favorite things about being a chef is watching people eat. I cook with my heart and my love. This is how my grandmother cooks for me.”