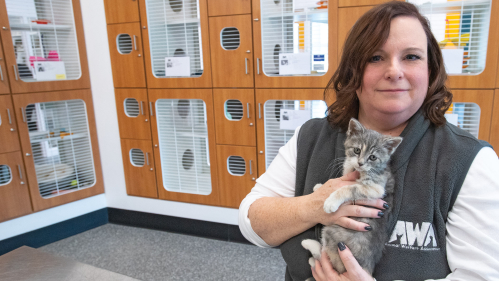 Alumna Laura Houston was a zoo administrator for 20 years before accepting her new position in May as executive director of the Animal Welfare Association.
Photography by Nick Romanenko

When she graduated from Rutgers University–Camden with undergraduate and graduate degrees in English, Laura Houston thought she would embark on a career as an English teacher. Over the past two decades, she has been teaching, alright—but teaching the public about pets and their humane treatment. Houston CCAS’90, GSC’94 is the new executive director of the Animal Welfare Association (AWA) in Voorhees, New Jersey, which operates the oldest (75 years) and largest low-cost spaying clinic, adoption center, and no-kill animal shelter in southern New Jersey. Its new state-of-the art facility, surrounded by 10 acres of paths for walking dogs daily, reimagines how cats and dogs can live in a low-stress, healthy, and nurturing environment as they await adoption.

Remarkably, each of the 54 dogs and 80 cats that can be housed at a given time are adopted within two weeks. Since opening its facility last May, AWA is on pace to find homes for 2,500 animals for the year, with the goal being 3,000 adoptions annually. Such a success rate is why AWA is “a pressure-relief valve,” accepting 85 percent of its population from shelters in several southern states where high kill rates are common. AWA, operating on an annual budget of $3 million underwritten exclusively from private donations, employs 55 full-time staff members who are assisted by 500 volunteers. One of its newest staff members is veterinarian Leroy Scott CCAS’10.

“To us, we are not just a shelter,” says Houston. “We are a hub for the community where people have the support for their pets so that they are not forced to rehome them. A main reason for rehoming is because of vet bills, which people can’t afford. So, making pet care accessible and affordable is paramount.”

Through a host of innovative programs, resources, and clinics that include adoptions, inexpensive veterinary services, pet training, pet therapy for those in assisted-living facilities, a summer camp for children, and educational classes on the humane treatment of pets, AWA strives to ensure that animal companionship is accessible to all who are interested in adoption. “The potential impact of this new facility—and the organization—made the job attractive to me,” says Houston, a longtime resident of West Deptford, New Jersey. “Many shelters are doing good work, but we have an opportunity here to really excel.”

Before her appointment at AWA last spring, Houston had been the director of education at the Elmwood Park Zoo in Norristown, Pennsylvania, and facilitated the zoo becoming the first in the nation to become a Certified Autism Center. She served at the Philadelphia Zoo for 15 years and helped create programs and exhibits, including the award-winning ZooCREW teen volunteering program and KidZooU: Hamilton Family Children’s Zoo & Faris Family Education Center. “I had been in the zoo field for 20 years, and I loved it,” says Houston, who has two rescue dogs of her own and two sassy African grey parrots, one of which, she says, curses like a sailor. “But after COVID-19, I wanted to work in my own community and still make an impact with animals.”