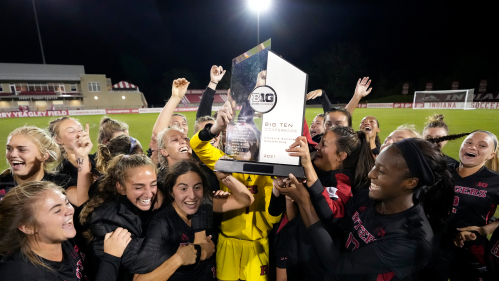 The Scarlet Knights women’s soccer team rejoices after taking the Big Ten Championship with the team’s defeat of Illinois, 3–0, on October 23.
Photography by Ben Solomon/Rutgers Athletics

In a year full of superlatives and milestones, the Scarlet Knights women’s soccer team won the 2021 regular season Big Ten Championship, the first in Rutgers Athletics history. Matching a program record for the most wins, the team (19-4-2, 10-1 Big Ten) won a record 13 straight games and registered 12 shutouts. Seeded No. 1 in the Big Ten Tournament, Rutgers beat Wisconsin in the quarterfinal round, 1–0, and defeated Iowa, 2–0, in the semifinals. The Scarlet Knights lost to the Michigan, 1–0, in the championship game, which was played at a packed Yurcak Field in Piscataway. Appearing for the 10th straight year in the NCAA Tournament, in which they were ranked No.1, the highest selection in program history, the Scarlet Knights lost in the Final Four round to Florida State, 1–0, after defeating Bucknell, Saint Louis, Texas Christian University, and Arkansas in earlier rounds.

The Scarlet Knights also set a program record by having nine Scarlet Knights earn All-Big Ten Conference awards. Among the highlights were Frankie Tagliaferri’s being named Midfielder of the Year; Gabby Provenzano, Defender of the Year; and Riley Tiernan, Freshman of the Year. The three player-of-the-year awards are the most in a year for the Scarlet Knights. The players who made the First Team were Amirah Ali, Tiernan, Provenzano, and Tagliaferri, who led the team in scoring during the season. Shea Holland received the Sportsmanship Award. In his eighth season as head coach, Mike O’Neill was named Coach of the Year.