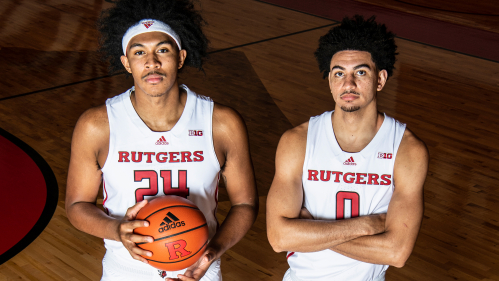 Geo Baker SAS’21 and senior Ron Harper Jr., star guards on the Scarlet Knights men’s basketball team, are leading the Rutgers squad again after playing big roles in the team’s breakout 2020–2021 season, which led to its first NCAA Tournament in 30 years. The magic returned on December 9, when the Scarlet Knights stunned No. 1 Purdue, 70-68, with a buzzer-beating bucket by Harper from just inside the half court line.

Baker and Harper had entered their names in the 2021 NBA draft process before they chose to return to Rutgers. The NCAA granted Baker an extra year of eligibility because of the disruption of the pandemic last season. Harper led the team in scoring, averaging close to 15 points a game; Baker was third, with 10.4. “We still have some unfinished business to take care of, and I’m excited to get to it, with Rutgers nation by my side. I’m back,” said Baker in a video posted on Twitter. “I’m glad that Geo and Ron had the opportunity to explore their opportunities through the NBA draft process and have decided to return to Rutgers for another season,” said head coach Steve Pikiell. “Their impact on our program has been significant since the day they stepped on campus.”