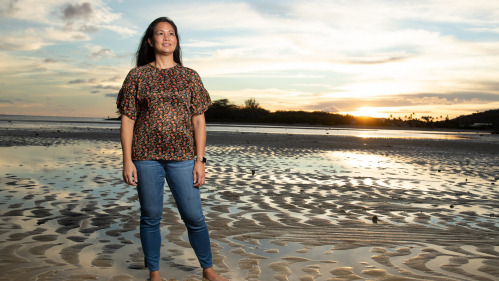 Pualani Tuyay Shimabukuro, a former star volleyball player at Rutgers, was a high school guidance counselor at the Saint Louis School in Hawaii, a hotbed of football talent destined for the big time.
Photography by Marco Garcia

As a star player on the Scarlet Knights women’s volleyball team, from 2000–2003, Pualani Tuyay Shimabukuro routinely set up her teammates for winning spikes thundering down on the varnished floors of the College Avenue Gymnasium. As a guidance counselor for high school students at Saint Louis School, a Catholic boys’ school in Honolulu, Hawaii, she has helped set up young men to star in college, and even professional, football. Her prized pupils include Marcus Mariota, who won the Heisman Trophy in 2014 as a quarterback for the University of Oregon and who now plays for the Las Vegas Raiders, and Tua Tagovailoa, who led the University of Alabama to a national championship in 2017 and is an emerging star quarterback for the Miami Dolphins.

“It’s an emotional experience to see my students earn the chance to compete in professional football,” says Shimabukuro RC’03, who also advised students who play pro baseball. “When I watch them play, I always say to my husband, ‘They still look the same as when they were in high school!’ I still see them as my former students, but I am in awe of where they are in their lives.”

Life in Hawaii may be associated with a laid-back lifestyle and Pacific trade winds, but residents’ passion for high school football—particularly on the island of Oahu, where Honolulu is located—is Lone Star State fierce. A common question among locals is to ask where you went to high school: Mililani, Punahou, or Saint Louis. During the 1980s and ’90s, Saint Louis ripped off 14 straight state titles, using a run-and-shoot offense that attracted some of the island’s best quarterbacks. Despite its small population, Hawaii has long produced many successful college and pro players. The best players were usually linemen and linebackers, but lately, Hawaii is producing quarterbacks, especially out of Saint Louis School. In addition to Mariota and Tagovailoa, Shimabukuro has been a guidance counselor for Jayden de Laura, the quarterback for Washington State University, and Chevan Cordeiro, the quarterback for the University of Hawai’i, as well as for players who are, yes, linemen and linebackers, such as Nick Herbig at the University of Wisconsin, Jordan Botelho at the University of Notre Dame, and Jordan Iosefa at the University of Southern California.

“Marcus and Tua were positive role models at our school,” Shimabukuro says. “Marcus was the epitome of what Saint Louis School calls the ‘Saint Louis Man.’ He did well academically, had positive relationships with everyone, played other sports, and participated in school activities. Tua was a great kid, too, and very focused on football. He did his own thing and was respectful of everyone. Tua made my role as his counselor easy because he was on top of his academics and took care of his responsibilities in the classroom.”

Until this year, when she took a counseling position at Roosevelt High School in Honolulu, Shimabukuro was a guidance counselor for 13 years at Saint Louis School, one of five counselors serving each high school class of roughly 120 boys who come from diverse backgrounds. After graduating from Rutgers and moving to Hawaii, which she visited frequently while growing up in San Diego, she wasn’t yet sure she wanted to work with children. Shimabukuro tested the waters by volunteering at high schools in after-school programs, where she was a substitute teacher and volleyball coach. She liked the work and got a master’s degree in counseling psychology from Chaminade University of Honolulu.

“As a former collegiate athlete, I was able to connect with students, and even with their parents, as they went through the process of being a student-athlete in high school and preparing for college,” says Shimabukuro. The secret to working with male teenagers, she found, was being understanding and straightforward with them. Adding humor to the mix helped, too. “I understood the time that families put in for practices and games and the financial and travel demands. I would share my athletic experience at Rutgers with my students, who would be shocked because all they saw me only as their counselor. I built a rapport with my students faster when those conversations took place.”

Even when her prized pupils were being heavily recruited by the biggest coaching names in college football, Shimabukuro never took a backseat as an adviser. Once she knew that a student was being highly recruited, she made every effort to contact coaches and establish a rapport, making sure that everyone agreed on what was expected academically of the student-athlete and making it clear that compromising grades for the sake of football was not an option. As with all her students, she kept everyone’s eyes on the prize of academics and a realistic future.

“I never promised anything to students,” says Shimabukuro, noting that half of the students at Saint Louis School enroll at colleges in Hawaii, with the other half rarely venturing farther east than the West Coast of the United States. “I was always straight up with them to have them prepare for the worst-case scenario if football did not pan out. I have always stressed, and continue to do so, the importance of their education. No matter what happens with the recruiting process, I always made it a point to tell my students that no one can take away their education.”

Shimabukuro’s own experience in choosing a college was far different from her charges. Determined to play collegiate volleyball after graduating from high school in California, she had never been to the East Coast when she made her first official visit to Rutgers University–New Brunswick. She fell in love immediately. “I didn’t totally know what I was getting myself into,” says Shimabukuro, who majored in sociology. “I took a leap of faith and, with the support of my family, boarded a plane to the East Coast.” Volleyball quickly became a huge part of her college life, with teammates and the coaching staff making her feel at home. Shimabukuro played all four years on the team, as a setter, and she was named Second Team All-Big East during her junior year.

According to Shimabukuro, hard work has been the secret sauce for her better-known pupils. They were excellent role models, making her job at Saint Louis School much easier and demonstrating to others that fame and fortune is hardly a given. “I definitely used them as examples to help motivate students,” she says. “From what they see and assume, students nowadays think the process of success at the collegiate and professional level is easy. I always made sure they understood that those athletes were successful in the classroom and were consistent positive influences off the field.”

Aside from the long after-school hours spent advising students and parents, Shimabukuro keeps abreast of best counseling practices by being a member of the Hawaii Association for College Admission Counseling, which, like other counseling associations, has had to withstand the collateral damage of the 2019 college admissions scandal. There was also the challenge during the first wave of the COVID-19 pandemic of connecting college admissions representatives and families remotely, ensuring that the experience was as fruitful as possible when in-person interactions were not an option. These days, at least fans of college and professional football can gather in homes and stadiums to cheer on their favorite players, a handful of whom Shimabukuro has had the joy to advise and befriend as they embarked on their remarkable journeys.