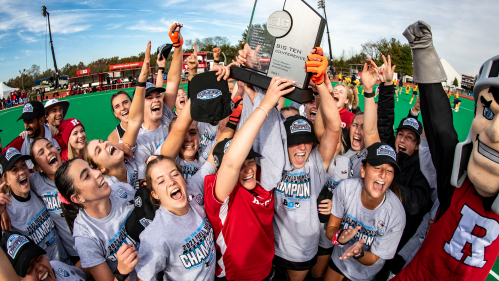 The Rutgers field hockey team reached new heights during the 2021 season. It won the Big Ten Tournament championship, a first for any Scarlet Knights team competing in the conference, defeating Michigan, 1–0. The team (19-4, 6-2 Big Ten) earned 13 wins overall against ranked teams, six of them against top-10 teams. The Scarlet Knights’ record at home during the last two seasons was 16-2.

“To have this season and this group of players who are so talented and so gritty, so committed to the team, is a really special thing,” said head coach Meredith Civico.

The Scarlet Knights entered its fourth NCAA Tournament, ranked No. 1 for the tournament and ranked No. 1 nationally—both firsts in program history. Alas, in the Elite Eight round, they lost to Liberty, 3–2, on penalty strokes after the game remained undecided following two overtimes.