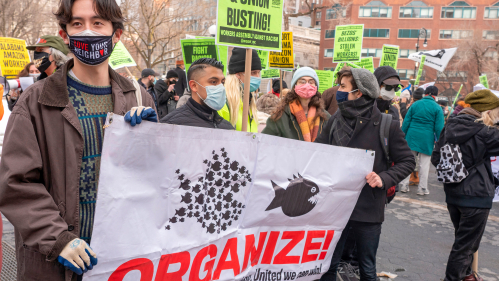 Protestors hold signs and march on a picket line across from Amazon’s Whole Foods Market in solidarity with Amazon workers attempting to unionize in Bessemer, Alabama.
Photography by Shutterstock

Growing up in England in the 1980s when labor strikes were frequent and visible, Rebecca Kolins Givan saw the connections between work, working conditions, and public policy. Those formative years sparked an interest that has led to her career as a leading scholar of labor and employment relations. An associate professor in the School of Management and Labor Relations, Givan is the go-to expert for media outlets reporting on labor issues—more topical than ever as COVID-19 upends workforce policies and practices and President Joe Biden seeks to fulfill a campaign promise to help working Americans.

RUTGERS MAGAZINE: What is the state of workers’ rights and compensation today?

REBECCA KOLINS GIVAN: In the United States, workers’ rights have been under attack for decades, with the right to form a union and bargain collectively steadily diminished since the New Deal era. Even when employers break labor laws, there’s often little enforcement. Compensation has steadily eroded with the decline in unionization and collective bargaining while the gap between executive pay and the pay of other employees continues to soar. CEOs now make more than 250 times the average worker’s compensation.

RM: What impact could Biden’s American Rescue Plan have on workers?

RKG: The Biden plan tries to address a number of areas where our economy is failing workers as the pandemic accelerates overlapping crises in employment, health insurance, housing, food security, and more. The plan’s solutions, though incremental, attempt to help workers remain housed, employed, and insured.

RM: The pandemic revealed that essential and gig workers lack basic benefits. Will they be more valued and better compensated?

RKG: Although many employers loudly thanked their so-called essential workers for their performance during the pandemic as they bragged about the essential services that they provided, actions speak louder than words. There were horrific examples of employer choices leading to worker illness and death in places like meatpacking plants and nursing homes as employees struggled to make a decent living. Amazon briefly provided hazard pay to warehouse workers while investing in campaigns to scare workers out of unionizing. Unions provide a voice on the job and a path to job security and a safer workplace. If these workers are going to receive the compensation and respect that they deserve, employers will have to change their ways, incentivized by stronger laws and regulations. As for the gig economy, companies like Uber have shown that investors, not workers, are their main priority. Gig workers have no access to overtime pay, health insurance, workers’ compensation, or protection from harassment and discrimination, and companies are willing to invest millions backing antiworker legislation to keep it that way.

RM: How have unionized workers fared during the pandemic?

RKG: Initial numbers suggest that unionized workers were more likely to retain their jobs in the pandemic than nonunionized workers. This is likely because unionized workers have the ability to negotiate job protections, often by creating options to avoid layoffs through furloughs, work share programs, and early retirement programs.

RM: During the pandemic, teachers and their unions have been at the center of public debate. What accounts for the upsurge in teachers’ strikes?

RKG: Before the pandemic, teachers were taking action, from strikes to mass lobby days, in numbers not seen in decades. Teachers demanded proper investment in public education, including adequate pay and benefits; “common good” investments like nurses and social workers in schools; and a commitment to racial justice to address the needs of brown and Black students and vulnerable families. As I argued in the book I coedited, Strike for the Common Good: Fighting for the Future of Public Education (University of Michigan Press, 2020), these actions occurred with widespread community support. During the pandemic, public concern has focused on the dual goals of providing appropriate student education and keeping communities safe. While some of those who typically undermine teachers’ unions have tried to pit unions against students, educators and parents actually all want a safe return to in-person education, whether through access to vaccines or through long overdue upgrades of school ventilation systems.

RM: Productivity among white-collar employees working remotely has risen during the pandemic, with employers reaping the cost savings. What does this mean for workers?

RKG: From space in their homes to internet access, these workers are paying for things that employers once covered. Professionals report an extreme lack of work-life balance and very long working hours. Some employers regard the pandemic as an opportunity to increase surveillance of their workers, too. Look for employers to consider carefully how they can decrease their costs while maintaining high levels of productivity and control over their workers. For some, this may mean moving to a largely remote workforce.

RM: Many in the working class feel forsaken as technology and global economics disrupt traditional jobs. Is their attitude justified?

RKG: In many growing occupations, workers are in no danger of being displaced by computers or robots. Home health aides are a huge and fast-growing occupational group, for example, with the largest projected future demand of all occupational groups. Even in sectors like warehousing and logistics, where technology is displacing some workers, the demand for human workers is high. Unfortunately, many of these jobs are not good jobs; they pay very little. The home health aide workforce is largely women of color, many of them immigrants, with median annual pay of about $25,000. Many of these low wage, physically demanding jobs are nonunion. We increasingly depend on the work done by people struggling to survive, with low wages and little to no access to health care, retirement, or other benefits.

RKG: Biden’s proposals incorporate many of the Green New Deal’s key elements. There’s an opportunity to move to green energy and infrastructure and to retrofit buildings—a transition requiring a tremendous amount of labor. Biden’s plan suggests creating high-quality unionized jobs to do this work, providing so-called “just transition” for workers displaced from the oil and gas industries as we move away from carbon dependence.

RM: How would the Raise the Wage Act affect workers and employers?

RKG: The act would create a $15 hourly federal minimum wage for all workers by 2025. One in five workers would see an increase in their income, enabling them to support themselves without relying on public-assistance programs like food stamps. For employers, the increase would phase in gradually, with the best economic estimates suggesting they could afford the wage increase without lowering their number of employees. The act would also abolish the subminimum wage for tipped workers; in many states, tipped workers like waitstaff earn a wage of little more than $2 an hour.

RM: What changes are most needed for women in the workforce?

RKG: To achieve gender equity at work, we need transformational change: paid family leave; accessible and affordable childcare; and pay transparency and equity. The pandemic’s massive wave of job loss heightened these inequities, falling disproportionately on women of color and on women who left the workforce to care for their children. Clearly, we don’t yet have the necessary structures to support women working outside the home and succeeding in the workforce. My colleagues at the School of Management and Labor Relations’ Center for Women and Work have done important research that demonstrates how desperately we need to address these issues.

RM: What changes are most needed for people of color in the workforce?

RKG: The structure of our work is the legacy of our racial and racist history. Many workers of color are excluded from basic protections of employment law because they work in sectors like agriculture and domestic work. Immigrant workers in sectors like meatpacking are exploited because employers prey on their fear of immigration authorities. The pay gap between Black and white workers is getting worse, not better. There’s no one solution or quick fix to undo centuries of history, but smart policy makers and employers can start by acknowledging the structural barriers that affect workers of color and commit to addressing these barriers, even when it means white workers, and white bosses, may need to give up advantages they’ve taken for granted.

RM: Is there a correlation between the drop in the percentage of unionized American workers and a drop in wages in general for working class employees?

RM: For some, unions are a bad word, even among workers. How did unions get this notoriety, and is there any truth to the claim?

RKG: Starting in the 1970s, employers, organized through associations like the Business Roundtable, realized they could save money and disempower employees by engaging in massive campaigns to discredit unions. At the same time, wealthy activists backed politicians and legislation bent on banning public sector unions. They succeeded wildly, perhaps most famously in Wisconsin in 2011. The billion-dollar anti-union industry can bombard workers with information anytime they consider organizing. Workers voting on unionizing at an Alabama Amazon warehouse reported being sent text messages multiple times a day and having flyers posted in the bathrooms, all attempting to explain why unions are bad. It’s no wonder some of these messages get through.

RM: Many companies are doing their best to interrupt employee efforts to unionize. Is this shortsighted?

RKG: These employers fear that unionized employees will have a voice at work and be paid more, eating into profits and the money that goes to executives and shareholders. However, in many sectors, unionized workers stay in their jobs much longer and are more productive than their counterparts in nonunion companies.