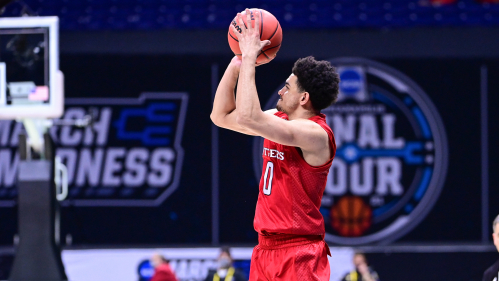 Guard Geo Baker had 14 points in the game against Houston, who beat Rutgers, 63-60, in the second round of the NCAA Tournament.
Photography by Ben Solomon/Rutgers Athletics

For the first time since 1991—three decades!—the Scarlet Knights men’s basketball team qualified in March for the NCAA Tournament. In the first round, the No. 10 seed Rutgers team defeated No. 7 seed Clemson, 60–56, for the Scarlet Knights’ first NCAA Tournament victory since 1983. In the next game, Rutgers had the Houston Cougars on the run, leading 50–40 with 11 minutes to play before losing 63–60, a heartbreaking defeat that ended the team’s remarkable season. Once again dominant at home playing in the Rutgers Athletic Center, Rutgers went 16-12 overall, including 11-11 in the Big Ten, considered the nation’s best conference. For the first time since the 1989–90 and 1990–91 seasons, Rutgers registered double-digit conference wins in back-to-back seasons. In the first round of the Big Ten Tournament, the No. 7 seed Scarlet Knights defeated No. 10 seed Indiana, 61–50, for its fourth Big Ten Tournament win ever but lost in the next round to No. 3 seed Illinois, 90–68. “This team made history,” said head coach Steve Pikiell. “They got through a two-year journey, with all the obstacles they had to fight through. They now become the standard for what we want to be here at Rutgers.”