Meet Rutgers Class of 2023: Students Are Among the Brightest in University History

Rutgers University opens its doors this semester to the Class of 2023, an accomplished group of students who are already working to make the world a better place and are poised to begin making their mark at Rutgers.

Mason Gross School of the Arts at Rutgers University-New Brunswick is welcoming Sydney Shiotani of Los Angeles, who won an ongoing role in the television series Better Things, as well as a voice role in the video game “Are You Smarter Than a Fifth-Grader: Make the Grade.”

The daughter of two actors, Shiotani has been performing on one stage or another since playing a starfish in a kindergarten production.

“Mason Gross really stood out to me from all the other schools because they made an extra effort to get to know me as a student and as a person,” Shiotani said. “When you're acting in a smaller-sized class, you need that to be a safe space. Rutgers made it clear they were not only looking for good actors, but good people as well, which I really appreciated.”

Her classmates include Maximillian Lieberman of Freehold Township, who is starting his first year at the Rutgers Business School-Newark and New Brunswick and the New Brunswick Honors College. Before college, he launched a Beatles cover band called The Stereotypes, which has raised hundreds of dollars for the Farm Sanctuary movement, a nationwide initiative to protect farm animals from cruelty.

Incoming Rutgers-Newark student JaniQua Guiste has already left her footprint on the university. While she was still a student at Malcolm X Shabazz High School in Newark, she worked with a Rutgers team to develop a “solar suitcase” designed to provide light for people who have lost power through acts of nature.

The device was put to good use following Hurricane Maria, which caused billions of dollars of destruction in Puerto Rico in September 2017.

The three students, all incoming members of Rutgers’ Class of 2023, represent a cohort hailed by admissions officials as among the brightest and most accomplished in the university’s 253-year history.

“Each year, our incoming students are intelligent, talented and ready to take on whatever lies ahead of them,” said Courtney McAnuff, vice chancellor for enrollment management for Rutgers-New Brunswick. “We look forward to seeing what they will accomplish here and supporting them to be successful.” 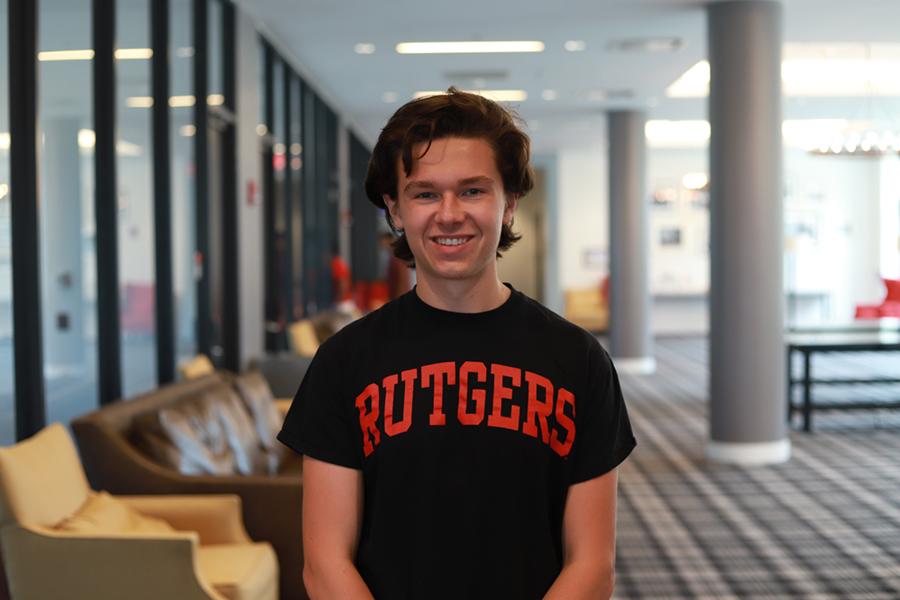 A record number of 45,200 students applied for admission to one or more of Rutgers’ locations statewide. Admissions officials project a combined first-year and transfer enrollment of 13,575 universitywide, with 9,550 students heading to Rutgers-New Brunswick and Rutgers Biomedical and Health Sciences – the university’s academic health division, which offers training in medicine, dentistry, nursing, allied health, public health and biomedical studies.

Rutgers-Camden is welcoming 1,525 first-year and transfer students, and Rutgers-Newark welcomes 2,500 students. For the fifth consecutive year, the number represents an increase in the number of Newark residents enrolling.

“An anticipated 20 percent of the first-year class in New Brunswick/RBHS are out-of-state and international students. Incoming students universitywide join a community of students from over 125 countries and all 50 states as well as the District of Columbia and Puerto Rico. The most represented home countries, in order, are China, India, South Korea, Nigeria and Taiwan.

For some members of the incoming class, the path to higher education was far from straightforward.

They share stories like Desinee Davis, who hopes to study psychology at Rutgers-Camden to become a counselor for young people. Davis struggled at Camden High School before being diagnosed with a learning disability. Last year, she lost the vision in one eye and was diagnosed with multiple sclerosis. But her persistence paid off, winning her acceptance at a number of colleges.

“I used to be in programs for kids who had problems, and they really opened my eyes that you can do better in life,” says Davis, who is part of the Educational Opportunity Fund program at Rutgers, an initiative that offers support to students whose circumstances put them at a disadvantage. “Now I want to help other teens do better in life.”

Aya Younes, who is studying at Rutgers’ Ernest Mario School of Pharmacy, has also faced her share of challenges. Born in Jersey City, she moved with her family to Morocco at the age of 3. A year of university there convinced her she would get the education she needed back in the United States.

With little knowledge of English, the American university system or the ins and outs of financial aid, Younes got herself back to New Jersey on her own, teaching herself about American food, culture and dress. 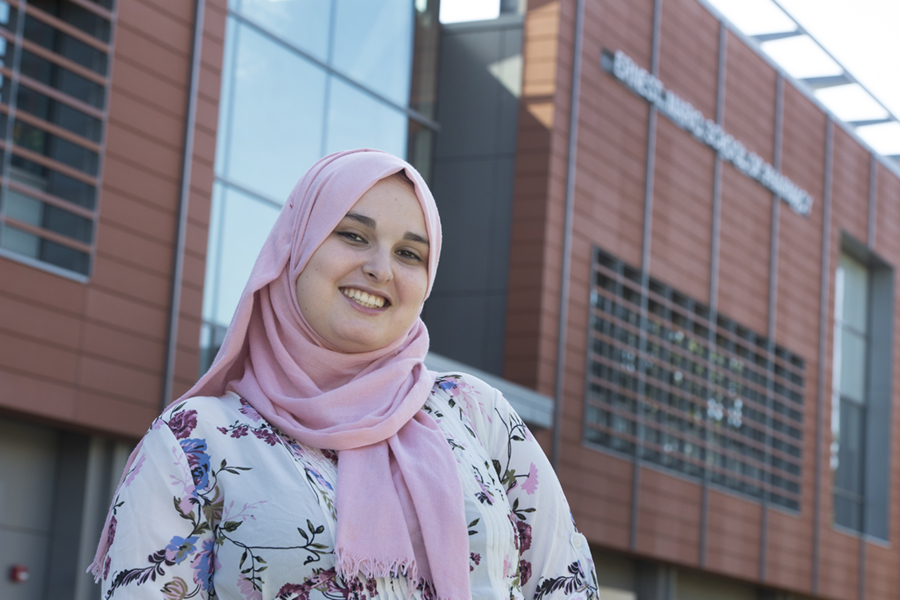 Guiste, who is beginning her studies at the Honors Living-Learning Community at Rutgers-Newark, also had a challenging road before coming to college, where she hopes to pursue a passion for ocean and marine biology.

Born in St. Thomas in the Virgin Islands, she fled to the U.S. mainland by herself in 2017 at the age of 16 after Hurricane Irma destroyed her family’s home. Living with an aunt and younger cousins, she spent every lunch period working to catch up to her classmates and graduated number 7 in her class of 143 students at Shabazz High School.

When she was a junior, an AP physics teacher put Guiste in touch with members of Rutgers-Newark’s International Leadership Exchange Global Scholars program who were building mini-generators for use in community centers and schools in hurricane-ravaged Puerto Rico, among other venues.

Their experiences were portrayed in a documentary called Be the Light, produced by multimedia personality and executive producer Angie Martinez.

“I was very happy to be part of it,” Guiste says of the project. “I learned how to work on a team with strangers coming together, and I could relate to what the people in Puerto Rico were going through.” 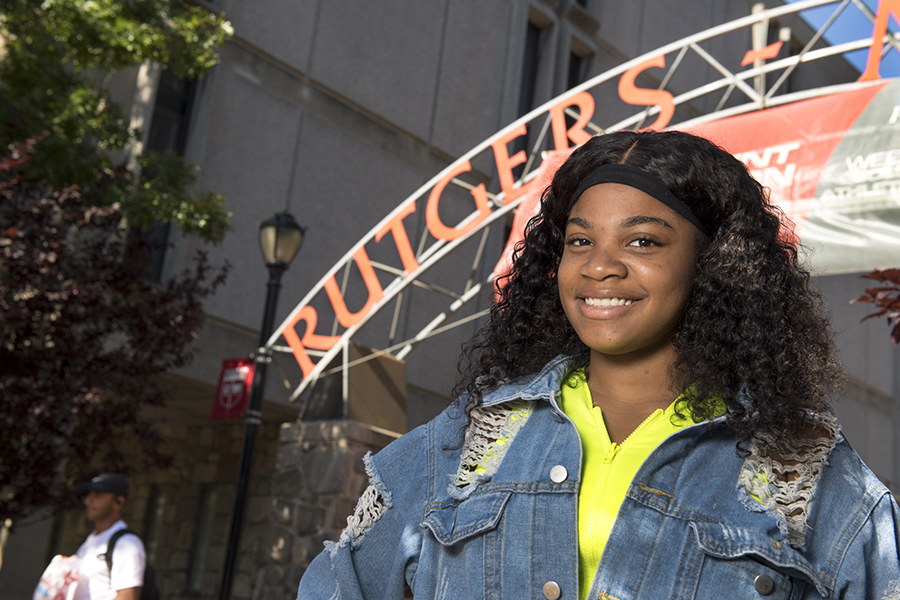 Incoming Rutgers-Newark student JaniQua Guiste worked with a Rutgers team to develop a “solar suitcase” designed to provide light for people who have lost power through acts of nature while still in high school. (photo: Nick Romanenko)

Other notable facts about the incoming class: