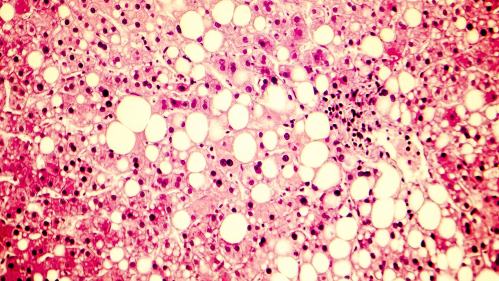 A hormone that triggers puberty and controls fertility in humans might be developed as a treatment for non-alcoholic fatty liver disease, according to new Rutgers research.

The study, appearing in the Journal of Clinical Investigation, provides powerful evidence that a modified version of the naturally occurring hormone kisspeptin can be used to treat non-alcoholic fatty liver disease (NAFLD). Globally, NAFLD is the most common form of chronic liver disease that affects children and adults and is linked to the rise in obesity and Type 2 diabetes.

NAFLD is known as a “silent” disease because it starts off with few or no symptoms. It begins with the accumulation of fat in the liver, resulting in a condition known as ‘fatty liver’. As the disease worsens, the liver becomes inflamed resulting in non-alcoholic steatohepatitis (NASH). This is followed by fibrosis and cirrhosis, where the liver becomes scarred and irreversibly damaged. A subset of NASH patients with cirrhosis will also develop liver cancer. Currently, there are no approved therapeutics to treat NASH.

Study lead investigator, Moshmi Bhattacharya, an associate professor in the Department of Medicine at the Rutgers Robert Wood Johnson Medical School, has spent over 15 years studying kisspeptin in health and disease. Kisspeptin, encoded by the KISS1 gene, was discovered in Hershey, Pa. and named for the iconic Hershey chocolate “kisses.” In addition to playing key roles in pubertal development and maintaining reproductive function, kisspeptin has also been linked to appetite and sexual attraction.

Bhattacharya along with co-author Andy Babwah, an associate professor in pediatrics at Rutgers Robert Wood Johnson Medical School, initiated this study to decipher the roles of kisspeptin in the liver, under healthy and obese conditions. The study’s first author, Stephania Guzman, is a Ph.D. candidate in Rutgers Molecular Biosciences Graduate Program. This collaborative study also included researchers led by Waljit Dhillo at the Imperial College London, U.K.

The researchers fed mice a high-fat, high-sugar ‘Western’ diet to induce obesity and NAFLD. The study showed that kisspeptin given to these mice protected them from the development of fatty liver, NASH and fibrosis. Kisspeptin works by binding its receptor, a protein called KISS1R. The study also showed that when KISS1R is deleted from liver cells, kisspeptin cannot function and mice on western diet develop fatty liver.  These experiments uncover a powerful relationship between kisspeptin and the reduction of liver fat and fibrosis.

“This work shows the kisspeptin receptor signaling pathway has a potential therapeutic role in NAFLD,” said co-author, Vinod K. Rustgi, director of hepatology and a Distinguished Professor of Medicine at the Rutgers Robert Wood Johnson Medical School. “It does this by protecting against the development of fat in the liver and reducing inflammation and fibrosis. As such, it has the potential to favorably impact the health and lives of millions of patients around the globe.”