Even if humankind manages to limit global warming to 2 degrees C (3.6 degrees F), as the Intergovernmental Panel on Climate Change recommends, future generations will have to deal with sea levels 12 to 22 meters (40 to 70 feet) higher than at present, according to research published in the journal Geology.

The researchers, led by Kenneth G. Miller, professor of earth and planetary sciences in the School of Arts and Sciences at Rutgers University, reached their conclusion by studying rock and soil cores in Virginia, Eniwetok Atoll in the Pacific and New Zealand. They looked at the late Pliocene epoch, 2.7 million to 3.2 million years ago, the last time the carbon dioxide level in the atmosphere was at its current level, and atmospheric temperatures were 2 degrees C higher than they are now.

“The difference in water volume released is the equivalent of melting the entire Greenland and West Antarctic Ice Sheets, as well as some of the marine margin of the East Antarctic Ice Sheet,” said H. Richard Lane, program director of the National Science Foundation’s Division of Earth Sciences, which funded the work. “Such a rise of the modern oceans would swamp the world’s coasts and affect as much as 70 percent of the world’s population.”

“You don’t need to sell your beach real estate yet, because melting of these large ice sheets will take from centuries to a few thousand years,” Miller said. “The current trajectory for the 21st century global rise of sea level is 2 to 3 feet (0.8 to1 meter) due to warming of the oceans, partial melting of mountain glaciers, and partial melting of Greenland and Antarctica.” 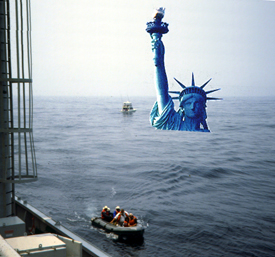 Miller said, however, that this research highlights the sensitivity of the earth’s great ice sheets to temperature change, suggesting that even a modest rise in temperature results in a large sea-level rise. “The natural state of the earth with present carbon dioxide levels is one with sea levels about 20 meters higher than at present,” he said.

Miller was joined in the research by Rutgers colleagues James G. Wright, associate professor of earth and planetary sciences; James V. Browning, assistant research professor of earth and planetary sciences; Yair Rosenthal, professor of marine science in the School of Environmental and Biological Sciences; Sindia Sosdian, research scientist in marine science and a postdoctoral scholar at Cardiff University in Wales; and Andrew Kulpecz, a Rutgers doctoral student when the work was done, now with Chevron Corp.