Three plant biologists at Rutgers’ Waksman Institute of Microbiology are obsessed with duckweed, a tiny aquatic plant with an unassuming name. Now they have convinced the federal government to focus its attention on duckweed’s tremendous potential for cleaning up pollution, combating global warming and feeding the world. 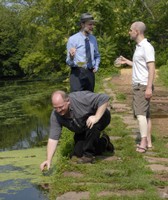 This enterprise builds upon Rutgers’ burgeoning energy and environmental research and the important contributions Waksman Institute scientists have already made to plant genomics, including the sequencing of rice, sorghum and corn.

At the behest of the Rutgers scientists and their colleagues from five other institutions, the U.S. Department of Energy (DOE) will channel resources at its national laboratories into sequencing the genome of the lowly duckweed. The DOE’s Joint Genome Institute announced on July 2 that its Community Sequencing Program will support the genomic sequencing of duckweed (Spirodela polyrhiza) as one of its priority projects for 2009 directed toward new biomass and bioenergy programs.

According to the researchers, duckweed plants can extract nitrogen and phosphate pollutants from agricultural and municipal wastewater. They can reduce algae growth, coliform bacterial counts and mosquito larvae on ponds, while concentrating heavy metals, capturing or degrading toxic chemicals, and encourage the growth of other aquatic animals such as frogs and fowl. These plants produce biomass faster than any other flowering plant, serve as high-protein feed for domestic animals and show clear potential as an alternative for biofuel production.

Todd Michael, a member of the Waksman Institute and an assistant professor of plant biology and pathology at Rutgers, The State University of New Jersey, led the multi-institutional initiative to have the DOE’s Joint Genome Institute perform high-throughput sequencing of this smallest, fastest growing and simplest of flowering plants.

“The Spirodela genome sequence could unlock the remarkable potential of a rapidly growing aquatic plant for absorbing atmospheric carbon dioxide, ecosystem carbon cycling and biofuel production,” said Michael, who is also a member of the faculty of the School of Environmental and Biological Sciences.

His collaborators in this undertaking include professors Randall Kerstetter and Joachim Messing of the Waksman Institute, and scientists at Brookhaven National Laboratory, the Institut für Integrative Biologie (Switzerland), the University of Jena (Germany), Kyoto University (Japan) and Oregon State University.

With the passage of the Energy Policy Act of 2005 and recent increases in food prices worldwide, the drive to develop sustainable feedstocks and processing protocols for biofuel production has intensified. The search for new biomass species has revealed the potential of duckweed species in this regard as well as for bioremediation and environmental carbon capture.