Solving the Mystery of Disease 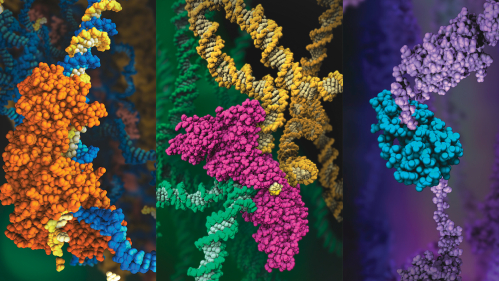 These images model the molecular structures of three enzymes that play critical roles in the life cycle of the human immunodeficiency virus (HIV). Left, reverse transcriptase (orange) creates a DNA copy (yellow) of the virus’s RNA genome (blue). Middle, integrase (magenta) inserts this DNA copy in the DNA genome (green) of the infected cell. Right, much later in the viral life cycle, protease (turquoise) chops up a chain of HIV structural protein (purple) to generate the building blocks for making new viruses.

If the COVID-19 global pandemic has proved anything, it’s that sharing scientific information saves precious time, avoids duplication of effort, and accelerates the research to discover and develop life-saving drugs and vaccines. That’s the opinion of Stephen K. Burley, director of the Research Collaboratory for Structural Bioinformatics Protein Data Bank (PDB) and the Institute for Quantitative Biomedicine at Rutgers.

Twenty years ago, Burley was a clinician-scientist who headed research at SGX Pharmaceuticals, the California company that deposited the first three-dimensional structure of a severe acute respiratory syndrome (SARS) coronavirus protein into the PDB. It’s a global open-access biostructure data resource founded in 1971 that today contains more than 180,000 protein, DNA, and RNA structures used worldwide by researchers for free to unlock the mysteries of human disease. As chair of the scientific advisory board of PDB in 2003, Burley had erroneously thought that the example of SGX Pharmaceuticals sharing free data would help fight the SARS epidemic and facilitate the discovery of drugs to treat the respiratory illness. The reaction of the scientific community was the same when the Middle East respiratory syndrome (MERS) epidemic struck a decade later. Silence.

Fortunately, scientists worldwide are now working together, using 3D protein structure information stored in the PDB to discover and develop vaccines and drugs that will protect the world’s population against the current pandemic—and future coronavirus outbreaks. Within months of COVID-19 cases appearing in late 2019, scientists in China deposited the first 3D structure of a crucial viral protein into the PDB. Today, more than 1,500 SARS-CoV-2 protein structures reside there, available to researchers, educators, and clinicians globally.

Managed by the Worldwide Protein Data Bank, with data centers in the United States, Europe, and Asia, the PDB recently celebrated its 50th anniversary. The PDB was cofounded by Helen M. Berman in 1971, while working at the Institute for Cancer Research, with an inventory of only seven protein structures. Berman, Board of Governors Distinguished Professor Emerita of Chemistry and Chemical Biology at Rutgers–New Brunswick, joined the Rutgers faculty in 1989, brought the PDB to Rutgers in 1998, and led it until 2014.

The National Institutes of Health (NIH) has provided more than $5 billion to structural biologists in the United States who have generated more than 50,000 of the structures available in the PDB. The data is central to understanding biological systems at the molecular level—an integral part of drug development by biotechnology and pharmaceutical companies. Today, the PDB is considered so essential that structural biology researchers who want to publish in peer-reviewed scientific journals must share their data through the PDB.

Biomedical researchers using the PDB have published more than two million scientific papers, some of them helping researchers and pharmaceutical companies tackle major health challenges, including heart disease, cancer, diabetes, Alzheimer’s disease, and HIV-AIDS. “Open access to 3D structure information from the PDB facilitated discovery and development of more than 90 percent of the 210 newly approved drugs by the United States Food and Drug Administration (FDA) from 2010 to 2016,” said Burley, who arrived at Rutgers in 2013 and is a University Professor and Henry Rutgers Chair in the Department of Chemistry and Chemical Biology at the School of Arts and Sciences. “Looking more closely at the 54 new anti-cancer drugs approved by the FDA from 2010 to 2018, it revealed that more than 70 percent of them were the products of structure-guided drug discovery, accelerated by open access to PDB structures of the drug targets.”

Last fall, scientists from the National Institute of Allergy and Infectious Diseases, part of the NIH, discovered how a key protein on the surface of the hepatitis C virus might bind to a receptor protein found on some human cells. This information, they hope, will provide insights into a vaccine for the chronic blood-borne virus, which has infected roughly 2.4 million people in the United States.

These breakthroughs are because of Berman’s vision and the commitment 50 years ago to help create a database of protein structures that would become one of the most important open-access biodata resources available to scientists across the world.