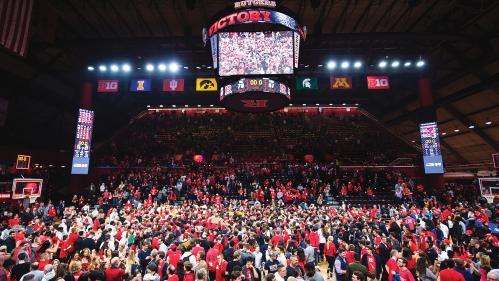 Rutgers’ upset of No. 9 Maryland on March 3, 78–67, epitomized the Scarlet Knights’ electrifying season as fans poured onto the court at the RAC, where the team had more home wins than any team in the nation.
Photography by Rutgers Athletics

The Scarlet Knights men's basketball team has its most successful year in decades.

Flush with the confidence of a strong finish to its thrilling regular season, the best in decades, the Scarlet Knights men’s basketball team took the court on March 12 at Bankers Life Fieldhouse in Indianapolis, Indiana, to warm up for its Big Ten Conference Tournament game against No. 9 seed Michigan. As two-time team captain Geo Baker led his team, seeded No. 8, through its pregame routine, word came down to the court that the game had been canceled; in fact, the entire tournament was done. The reason? Safety precautions because of the COVID-19 outbreak. Crushed, the team returned to the locker room. Players and fans were left to wonder what might have been—but certainly aware of what had been done.

To my brothers: I have no idea if our last game as a unit has passed but I know that this year has been truly special. We did this for no one but ourselves because we worked for it. People were on and off about our team but we never strayed off the path … I hope this is not the end of the road for this group because I know we still have so much left. But I’ll never forget any of this season. Ups or downs. Love y’all to death. 1991/2020

There was no place like home court this season for the Scarlet Knights, which had the most home wins in the nation, with 18. The team also posted its most conference wins since the 1990–91 season and its first 20-win season since 1982–83. Playing before exuberant sold-out crowds at the Rutgers Athletic Center (a.k.a. the “Trapezoid of Terror”), the Scarlet Knights thrived on the play of Baker, Ron Harper Jr., Akwasi Yeboah, and Jacob Young SMLR’20, who led Rutgers to dramatic double-digit wins over four nationally ranked teams as Rutgers ascended to a No. 24 national ranking. The team’s upset over No. 9 Maryland on March 3, 78–67, epitomized the team’s electrifying season as fans poured onto the court at the RAC. With its overtime road win over Purdue just days later, Rutgers (20-11, 11-9 Big Ten) secured a first-round bye for the Big Ten Tournament, its first since joining the conference, and was considered a virtual lock for its first NCAA tournament bid in almost 30 years.

At season’s end, head coach Steve Pikiell won the 2019–20 Jim Phelan Award, given each year to the nation’s top Division I men’s basketball coach. Completing his fourth year leading the team, Pikiell signed a contract extension with Rutgers—good news for players and fans alike. Next season, which can’t start soon enough, will provide the answer to how far Rutgers could have gone. “We can play with anybody in the country,” says Pikiell. “I think our best days are ahead.”